Change a department in the planning version

If you need to work with transverse units and areas in Stratsys, we recommend that you contact your consultant to find out which solution can suit you best.

Department groups
You can also select whether the new department belongs to a unit group. See Department Groups.

Default reporters (report)
Here you can specify who will automatically be added as a manager when new reports are created. It is also possible to set up default contributors in the administration Users. Read more in Add user. See Also Default contributors and Default entities and for a more detailed description of the functionality.

Default Manager (Nodes)
Select the name and responsibility role that the setting should apply to. It is also possible to set up default contributors in the administration Users.

To change an existing department group, click the name of the department in the department tree. You will then get to the page Change Department Where you fill in your changes and confirm them by clicking on the button Save. 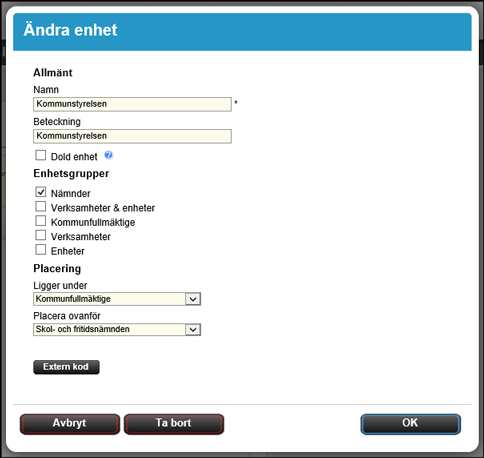 General
Name
A department must always have a name. If you change one of your department name, type the new name here.

Designation
If your departments also go under a different designation, you can fill out this. For example, the Apply departments abbreviations that take up less space if they are to be printed in a view.

Placement
With is under And Place above Allows you to control the exact placement of the organization tree, including relationships between entities within the same level.

Obs! Moving departments to a different level, or merging two departments, affects scorecards and reports to a large extent. Consult with the responsible consultant on how to proceed.

Obs! Only departments that have no sub-assemblies may be removed. Removing departments affects scorecards and reports to a large extent. Consult with the responsible consultant on how to proceed.

Change a department in the planning version

When you want to make an organization change that takes effect only the following year, you do so when you are in the planning version.

Departments that you add here are visible only in the organization tree when you are in the planning version. If you make a change to a department that was added to a previous version, the change will only be visible in the planning version. If you want to make a change that will also be reflected in the current version, you must select the current version in the version picker before making the organization change.


There are two different ways to automate the division of responsibilities in the tool. For text/dimension and activity nodes you can use default managers and for reports you use default contributors.

Default Manager (Nodes)
To speed up your planning work, you can define which users will automatically be added as managers in each Responsability role. Each unit can have one or more default operators. These people will automatically be responsible for new nodes that are created on or pushed down to the department. It is possible to administer the default contributors per unit under organization/default contributors and default operators of one unit or per Users

Specify the department and the responsibility roles to which the user will automatically generate.

In the change mode of nodes, you can manually change who is responsible if the responsibility is to be allocated to someone who is not the default manager.

Obs! For Activity nodes (and some customers, too), the default manager is set only on the drive where the node is created-not on departments to which the node is made visible.

Obs! In an already existing report, the new maintainer is added except where individual default contributors are manually removed. Manually added contributors are not affected by the setting up of a default reporter for the department.

If you would like to use default contributors in old reports, you can read more about it in the article administering contributors for a report.

To add one or more users as the default reporter, you can go into the organization settings in the administration and click on the department(s) you wish users to become the default reporter for. You can also set this setting in the user settings. See Add user. 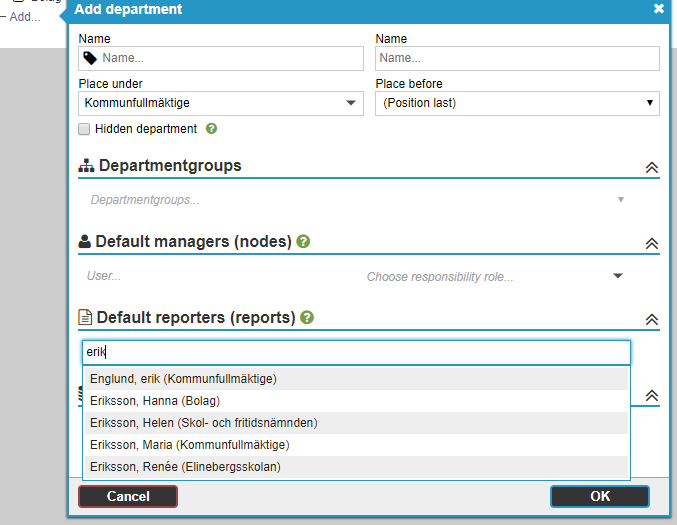 It is not possible to set default reporters for a particular scorecard such as the environmental plan or the equal Treatment plan.